The Escape from Holland

Personally, my alarms went full nuclear when I heard the borders in Finland would be closing and airplanes are going to stop flying. It was at this moment, when I realized that the coronavirus is deadly serious. (A zoom into a grey, serious face of me.)

My plan was to surprise my mother on the her upcoming birthday (that did not work out too well), so the only thing I had to do was to change the date of departure. It was 18:30PM when I changed the flight date on my ticket to 20:35PM for that same day.

Why did I choose to fly on the same day, mere hours away? Mainiac! Imbecile!

Sometimes I make my life a bit harder than I should, but are bold risks, challenges and excitement not adventures? This was certainly one. It felt as if I was in an 80s movie where an imminent, invisible danger was closing on me.

No way going around it; I had to be quick, and quick I was. In thirty minutes, I had crammed my backpack with socks, shirts, and other essentials. I guess I learned something useful from the time in the army after all. Army was often always about running everywhere to wait.

During the following fifteen minutes I had taken out the perishables from the fridge, and had given my plants to the neighbor. My neighbor's room is not far from the looks of Hortus Botanicus; it is another specimen to his collection. His cat enjoys the leaves. Last time she had eaten the bottom half; this time I expect only the stem and nodes remain when I return. 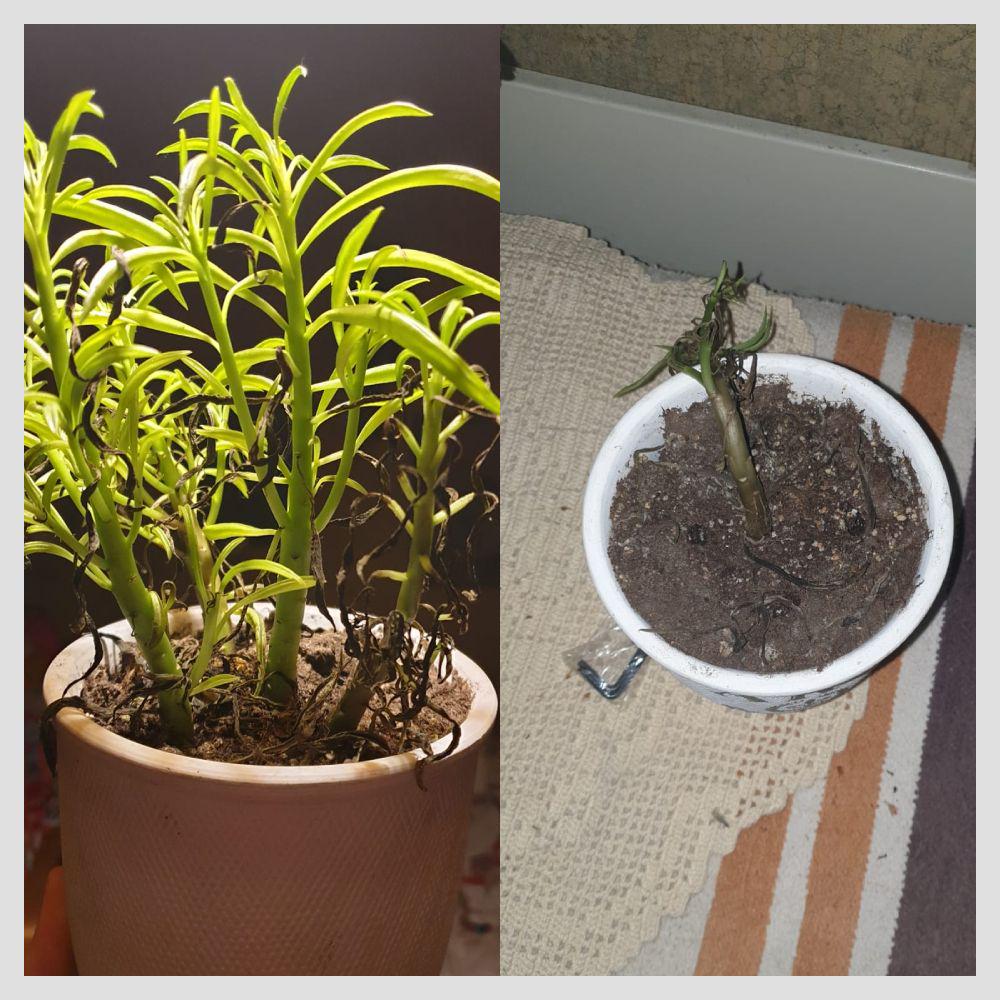 Before-after photo of my plant.

I stepped outside and closed the door behind me. I opened google maps and checked where the bus would pick me up. I thought it was the usual, closer bus stop, but apparently it was the other one further away. After sprinting to the bus stop, I took a second glance at google maps just to make sure I was at the right stop. Crap. Was it not this one? Now I had only five minutes, tops—crap, shit! Am I going to miss the plane?

I started to run towards the other bus stop a few blocks away that I initially thought of. Thirty meters in and I grew suspicious and made myself to double-check, just in case. And so it was that the bus already drove by the usual, closer bus stop, because it was on the same travel route. I was then standing on the right stop then. Google calculated the smartest route for me, and guided me to the right place, even though it made no sense at first. Google knew something I didn't.

The bus driver took me to the train station. The train was on time and I reached the airport twenty minutes past eight. I ran past the check-in, and made my way to the gate. The security check was empty of passengers; it was just me. The gate security looked at me funnily. I think my hurried behavior and sweat on my face made them think I was up to no good. Or maybe they thought I had fever. The only thing missing was a black beard and a turban, and me coughing. The airport inspector joked that I did not have to hurry since there was no que behind me. True that, but I had a plane to catch!

Luckily, I did make it to the airplane. It was only five minutes until takeoff; not even close!

I am sorry that this story did not end with cinematic finale of me chasing the plane on a baggage truck or whatever. It ends with me sitting next to an awfully talkative Finnish guy from Spain, about the same age as I am. I don't think I remember saying much about myself, whereas he told his whole life story in just two hours.

Now he sneezed straight on his palms. Oh dear.